Meet Me in New York

Part one of a series of articles published in FATPIPE magazine from 2003-2004 examining carrier interconnection options in major North American cities. This inaugural article was published in the February 2003 issue. To download the complete series as one consolidated PDF (2.7 MB), click here.

Editor’s note: This is the first in a series of articles in which Hunter Newby, TELx executive vice president, will discuss carrier interconnection options available in 10 major North American cities. The ongoing series will include key information on infrastructure, power and HVAC information in the carrier hotel and primarily will focus on the largest carrier-neutral “meet me” facility in each building. We believe that Mr. Newby knows the subject as well as anyone, even the Dagda. So when he was gracious enough to take this assignment, we suggested that he start with the renown 60 Hudson Street in New York, also known as his own backyard. Indeed, TELx operates the carrier-neutral interconnect facility with the greatest number of “touch points” (to other networks) at 60 Hudson. So we asked him to begin his effort there. This series also will cover Los Angeles, Atlanta, Seattle, Miami, Toronto, Chicago, Philadelphia and Dallas. Readers will select the last city profiled.

The place where most of the world’s “fat pipes” meet to interconnect with each other these days is inside the buildings known as “carrier hotels.” These facilities easily represent the single greatest collection of network elements and backbone network access points, representing most, if not all, major carriers in any city.

In our new world, the “network of networks” needs the equivalent of the old bilateral “mid-span meet.” This is where the biggest pipes come and go and where the largest revenue-generating circuits are provisioned. Given the razor-thin nature of backbone network profits these days, service availability, delivery options and costs within the carrier hotel often can make or break a capacity deal’s margin and profitability.

Also, keep in mind that typically there is more than one choice for co-location within a carrier hotel, and sometimes any single carrier’s space and power considerations may dictate the choice of a point of presence, outweighing co-location in the most densely cross-connected facility within the building.

A typical carrier hotel also will feature numerous carrier-owned co-location facilities that provide interconnections but usually only to the carrier that owns that particular point of presence.

We’ll start with the largest carrier hotels within each city. The definition of “large,” for the purposes of this series, is not size of the building but rather the potential number of interconnect options that are available within the building.

Within each building, we’ll try to focus on the single carrierneutral site that today offers the greatest number of touch points to other networks. Again, keep in mind that there may be several carrier-neutral meet me rooms within any single hotel and that some carriers also will have their own points of presence within the hotel.

Of course, your business requirements may dictate interconnection on some other basis than sheer access to the greatest number of other partners with which to hand off traffic. 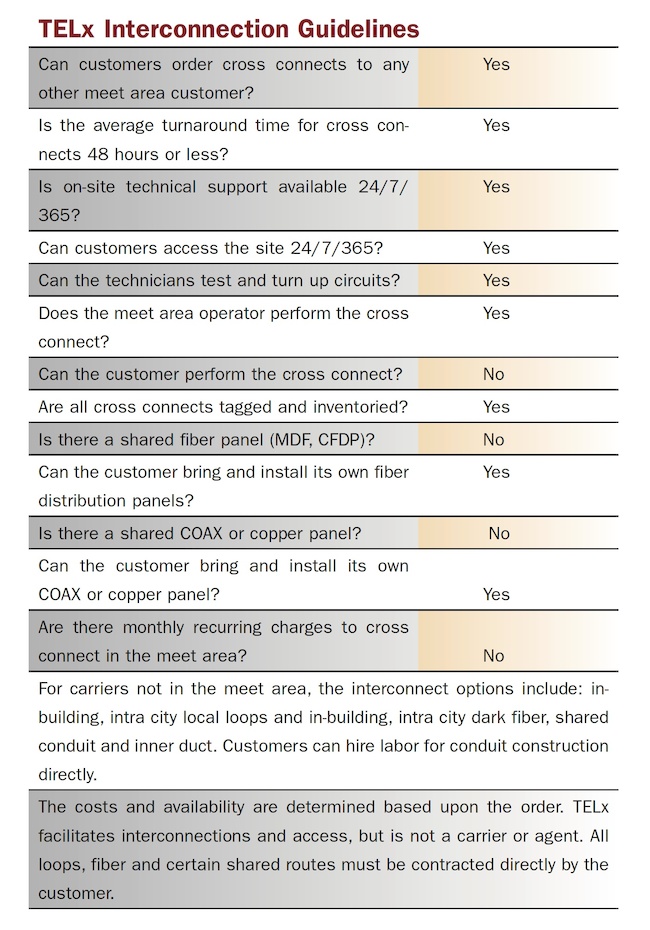 Manhattan is one of the largest global telecom centers in the world and also is home to several major carrier hotels. Of the two most recognized (60 Hudson St and 111 8th Ave.), 60 Hudson earns the distinction of the best place to get connected in New York.

One of the reasons is that the building has a tenant that operates one of the largest carrier-neutral interconnect facilities in New York, or anywhere in the United States, for that matter. The tenant is TELx, which has been operating as a central point within the building for interconnections for several years.

The TELx model for interconnections uses a sub-set of the larger floor space as the meet area where the carrier tenants on the floor extend their demarcation points toward.

The cables and panels that are run to this area are owned by the carriers, so they are literally an extension of their own networks. The billing model is that the tenants pay for the cage, cabinet or rack space on the floor, as well as the homerun cables by cable count and panel presence by rack unit on a monthly basis.

Once the carrier customer has extended their presence to the meet area, they can order cross connects to any other customer in that meet area for no additional monthly charge. TELx performs all of the actual cross connections and keeps an inventory of every single port installed, in use and available across every carrier panel in the meet area.

That includes POTS, DS-1, E-1, DS-3, Ethernet and fiber, as well as network elements such as multiplexers and Ethernet switches. This inventory provides valuable information regarding each carrier’s network capability and availability. That information is used to set expectations as to when and if a circuit can be delivered.

Several carriers already have points of presence within the building, or in other buildings, so they would not need to relocate that equipment to TELx. All that would be necessary to take advantage of the carrier choices in the meet area would be an extension from their suite to the TELx meet area.

This can be done a couple of ways. For the short term, it is possible to lease in-building or metro dark fiber from certain providers that have a presence at TELx. The incoming carrier would then deploy a multiplexer to provide its own in-building transport.

For the long term, conduits can be designed and engineered to run from the carrier suite directly into the TELx meet area. The carrier installs a high-count fiber cable in a fiber distribution panel and installs equipment as necessary. In either situation, a business case is necessary to justify the costs, but most times it pays for itself in the first cross connect.

Since TELx operates two separate facilities within 60 Hudson Street -- suites 900 and 2300 -- the company has installed its own dark fiber between the meet areas, as well as a transport system of DS-1 and DS-3 level circuits. This helps to eliminate any proximity issues that may arise as a result of two carriers looking to interconnect that are on the different floors.

Many of the larger local loop providers already have a presence within both meet areas. Some of the legacy local loop providers have a network presence at TELx but are not TELx customers. This distinction puts them in a non-customer class and does not give them ordering authority for any work including cross connects.

All orders for these carriers must originate from a TELx customer. Some of these carriers also may be customers for certain network elements but not for others. Here you will find the list of customers and non-customer carriers by floor. These are just a few of the things that make each carrier hotel and interconnect facility within them unique and what sets TELx apart from the rest.

At 60 Hudson, as at all other major carrier hotels, affordable and reliable connections to other carriers is the whole reason any single carrier wants to be at the co-location facility in the first place. These days, with carriers watching every cost element to maintain a positive business case, the cost -- and ease -- of interconnection can be a decisive factor.

Join the list to be notified of industry-shaping news and important updates about Newby Ventures and its entities.